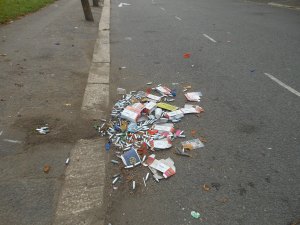 Street scenes in Vauxhall after legal high use the previous evening

Lambeth council and the borough’s police force has proposed bringing in on the spot fines for people using or littering legal highs, ahead of substances such as club drug nitrous oxide being made illegal to produce and supply in the UK.

People in Lambeth caught using legal highs, littering canisters and whippets used for inhaling nitrous oxide or possession could get an on the spot fine of £100 with the potential for further action, including a court appearance and fine of up to £1000.

“The Government’s new laws will tackle production, importation and supply of legal highs, but there’s a big gap around actually tackling people who use these drugs and leave canisters lying all over our streets.

“The mess left in some of our neighbourhoods after a Friday and Saturday night just isn’t acceptable, with families having to witness this behaviour on a regular basis, as well as coming across these canisters in their playgrounds, parks and streets.

“So we are proposing to use a Public Spaces Protection Order to protect local people’s quality of life and get on top of this problem.”

In Lambeth during the past 12-months residents and the council have noticed a significant increase in anti-social behaviour and litter (canisters and whippets) relating to legal highs, in particular nitrous oxide.

Public Spaces Protection Orders were introduced last year and give councils power to tackle activities in public that is likely to have an ongoing negative effect on the quality of life for locals.

Inspector Neil Cochlin, from Lambeth Borough Police, said: “Both the police and local authority have listened to concerns from residents and businesses about anti-social behaviour and crime caused by legal highs such as nitrous oxide.

“Last summer saw a rise in legal high-related problems, particularly in the borough’s green spaces, and we are committed to prevent a repeat this summer.

“The potential use of a Public Spaces Protection Order is a first for Lambeth Borough. Consuming or possessing legal highs could result in an on-the-spot fine and a requirement to hand them over. Failure to surrender any legal highs will be a criminal offence and could lead to the person being arrested.

“The message is very clear: if you want to take legal highs or cause trouble, avoid Lambeth.”

Lambeth council will survey residents for feedback on the Public Spaces Protection Order and it will only go ahead if it gets public backing. For more information visit http://www.lambeth.gov.uk/consultations/public-spaces-protection-order-for-legal-highs.